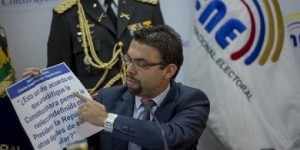 Two days after the collective Compromiso Ecuador requested to the National Electoral Council (CNE for its Spanish acronym) the approvation of delivery forms for a popular consultation on indefinite reelection, the electoral organism denied the request, arguing that its content addresses constitutional issues.

Thereby, the CNE President Juan Pablo Pozo, said that the order of this movement is led by former presidential candidate of the CREO party, Guillermo Lasso, who will go to the Constitutional Court to point the procedures.

The two resolutions were adopted unanimously by the five members of the CNE. In both cases it was argued it does not complies with what determines sections 100 and 104 of the Constitution, which state that a consultation of national character and dealing with subjects of the state to more, plus 5% of firms of voters registration, is required a prior ruling by the Constitutional Court on the constitutionality of the questions.