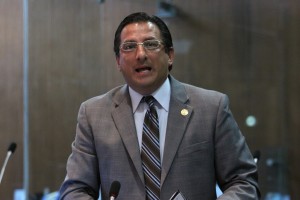 While the legislators of the majority of Alianza PAIS (AP) in the Commission on Sovereignty and International Relations expect that the Council of the Legislative Administration (CAL for its Spanish acronym) officially assigns them the investigation of the purchase of seven Dhruv helicopters, the minority outline strategies to access information.

Until the afternoon of Friday February 13, the CAL did not notify to that table of the resolution it processes of this investigation on pre-contractual and contractual phases for the acquisition of aircraft to the company Hindustan Aeronautics Limited (HAL) in 2008.

Among the minority is Diego Salgado (CREO), who designs his own agenda to access the pre-contractual and contractual documents of the purchase by the Ecuadorian Air Force (FAE) and the Ministry of Defence. The plan is to know why they were acquired and what other bids were submitted to the authorities.

Antonio Posso (Avanza) besides being engaged in “dusting off” the existing information from the previous Audit Commission, he outlines a list of appearances to the committee, of which he is a member.