CNE is getting ready to renew the Council for Citizen Participation 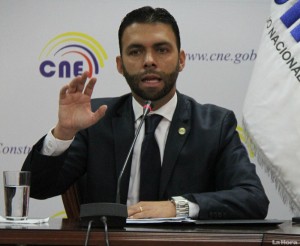 The President of the National Electoral Council (CNE), Juan Pablo Pozo, said yesterday that this Thursday will be announced the list of national overseers who will accompany the process for selecting the new members of the Council for Citizen Participation. Until Saturday, 201 applications (108 men and 93 women) were received.

Pozo said that the regulations are already approved and only the instructional and date of convocation are left to be defined, which may tentatively be Sunday, February 15th.

“From that date, 10 days are left (working days) for nominations of candidates,” he said.

In order to make transparent the competition, the President of the CNE also announced that the observers of the Electoral Council of UNASUR and UNIORE were already asked, “so they are present at specific stages of this process, for example, when opposition tests are taken, when the final list regarding the merits is presented, or when the citizens challenge is done.”