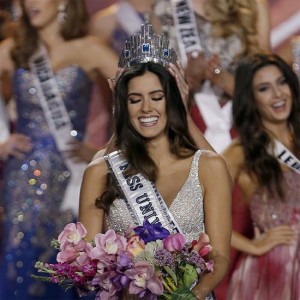 Colombian Paulina Vega was crowned the new Miss Universe, while the representative of the United States was in second place. This, while Jamaica received the award as the fourth finalist before the dissatisfaction of the public.

This is the second time in the tournament’s history that Colombia reaches the crown since 1958.

This time only four Latinas passed the semifinals of the pageant. Alejandra Argudo, the Ecuadorian candidate, did not reached this stage. The representatives of Colombia, Venezuela, Argentina and Brazil managed to enter to the first stage of the contest.

The candidates of Italy, India, France, Indonesia, Spain, the Philippines, Jamaica, Ukraine, Holland, Australia and the host country, the United States joined them.

Queen Celestine of Nigeria was elected Miss Congeniality, while Gabriela Berrios of Puerto Rico was recognized as Miss Photogenic.

Opposition march for the shortages and inflation in Venezuela