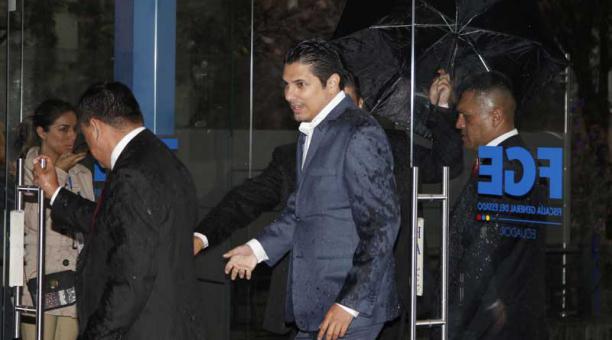 The investigations for the kidnapping of Fernando Balda were activated in Colombia at the end of 2012. That year, the specialized unit in plagiarism and extortion handled the complaint and identified three Ecuadorian policemen as possible intellectual authors of these events.

According to the judicial reports of that country, these three agents allegedly contacted a criminal group in Colombia to retain the exasambleista of Sociedad Patriótica.

This information now in the possession of the Ecuadorian Public Prosecutor’s Office allowed the capture of the police officers between the morning and night of last Monday, March 19, 2018, in Quito.

On Tuesday, March 20, they received preventive detention under the figures of conspiracy and kidnapping.

Prosecutor Jimena Mena, in charge of the investigation, confirmed that the three defendants belonged to an intelligence group of the Ecuadorian Police. At the hearing, the prosecutor exhibited the immigration reports of the three suspects and revealed that they were in Colombia on the date of the kidnapping; that is, on August 13, 2012.

According to the complaint, that night, around 9:00 pm, Balda was intercepted by four men and a woman, in a street in Bogotá. The group climbed it in a 4×4 vehicle, gray, with plates BRN-651, and took the northern highway, towards the outskirts of the capital.

“They coordinated, via telephone, with other people the place where ‘they were going to deliver me,'” Balda said in the court document. Colombian agents managed to locate the car and rescue the exasambleista that same night, by the warning of some taxi drivers who witnessed the kidnapping.

The material authors were arrested and sentenced for the ex-legislator’s plagiarism.

All of this data is included in the file that was activated in Colombia and were already sent to Ecuador, through criminal assistance. The document was received by prosecutor Mena.

On Tuesday, the Prosecutor of that country published a statement in which it warns that the arrest of the three Ecuadorian agents was achieved by “the permanent exchange of information” of both nations.

“The investigation into the abduction of the former ruler would indicate that alleged perpetrators ordered the politician’s detention and for that they would have contacted a criminal group in Colombia,” he said.

The entity also reported that “it will advance in the necessary procedures so that those caught are charged for the crime of simple kidnapping.

” What was the role of the three intelligence agents in the plagiarism of Balda? Did they receive orders from a superior to coordinate the kidnapping? THE COMERCIO asked these questions to Diego Chimbo, lawyer of the uniformed, but indicated that, “for the moment, would not give any statement.

” Felipe Rodríguez defends Balda. For him, the investigation must show the names of those who devised the illegal retention of his client. “We are not going to allow, in any way, that agents of a lower rank have paid kidnappers in Colombia. It is evident that they received orders from ‘big shots’ and this judicial process must be against them.”

The lawyer also mentioned that to execute the kidnapping allegedly used money from the Secretariat of the Presidency, “authorized by the private secretary of (then) President Correa.”

That is currently under investigation by prosecutor Mena. This newspaper learned that one of the agents captured on Monday apparently rented the 4×4 car that was used for the plagiarism, in 2012. His signature is included in the registration document, according to the investigations of the Colombian Prosecutor’s Office.

This agent even infiltrated a forum organized by former President Álvaro Uribe, in May 2012, in Medellín.

Balda was invited to that event. In fact, he says he met the intelligence policeman at that appointment. “He passed himself off as a representative of an NGO whose interests were similar to those discussed there,” the ex-ambassador reported through a web portal.

He added that under that facade, the uniformed approached him and started a talk. “He told me that in addition to the activity in his NGO, he had a security company in Quito. He told me that he would return to Colombia on future occasions and that he would like to talk with me about political and commercial issues. ”

Thus, a second visit was concluded that ended with plagiarism on August 13, 2012, according to the investigations in that country.

In Ecuador, on the other hand, as part of the proceedings, the prosecutor Mena took on Monday, March 19, the free and without oath statement of Assemblyman José Serrano; he served as interior minister when Balda’s plagiarism occurred.

Upon leaving the Prosecutor’s Office, Serrano said that “the only thing” he knows is that Balda “was deported legally by the Colombian government, carrying out all the procedures.”

“It was even the Colombian government itself that provided a plane for Mr. Balda to be transferred to Ecuador,” the legislator recalled.

In October 2012, the immigration authorities of that country reported that Balda would be deported to Quito because he was serving a sentence for the crime of slanderous insult, presented by an official of the Presidency of Ecuador.

While Prosecutor Mena’s investigations are progressing, the detained agents remain in the Prison 4 of Quito. (I)