Commission acquiesced to presidential veto of the Telecommunications Act 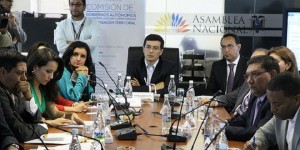 Yesterday, the Commission of Autonomous Governments approved the report in which they accept the 24 observations made by President Rafael Correa to the Telecommunications bill.

With eight votes in favor and one abstention, the legislative committee left ready the report to be submitted to the Commission on Legislative Administration (CAL for its Spanish acronym) and to be finally approved in plenary session of the Assembly.

Among the comments made by the Executive branch is the proposed table for the collection of a value based on market shares of telecommunication companies. It is proposed that the base is not 30%, as proposed in the report for the second debate, but from 35% of concentration of users.

With the approval of this bill, the companies that will begin to pay more to the Treasury will be Claro and DirecTV, which have 68% and 35% of market share, according to the Superintendency of Telecommunications (Supertel for its Spanish acronym).

Another remark Correa made refers to the sanction regime, which enabled enterprises to receive double warnings in two different instances. In addition, the subject of appeals was revised.

The Assembly has 28 days left to acquiesce to the presidential veto by the Plenary Session.