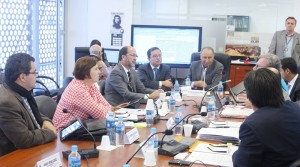 The members of the Commission on Economic Regime of the Assembly were summoned tomorrow with the aim of analyzing the partial veto of the Executive to the draft Monetary Code, sent on August 22 to the Assembly.

Oswaldo Larriva, President of the Commission, said that he expects the report would be ready by Thursday to be sent to the General Secretariat of the Assembly.

The Executive developed more than 50 objections to the project. According to Larriva, most of the observations were of form.

Among the substantive changes; however, it is proposed the statement that for any reason the Board of Policy and Financial and Economic Regulation can intervene and determine which person or entity may receive credit from private Banks.

In addition, all credit operations granted by private banks should have guarantees and it is clarified that the liquidity funds will not be used to purchase government bonds.

Larriva preferred not to overtake his judgment regarding to whether he will support or not the trespassing text of the Executive.