Commission on amendments to the Constitution meets today 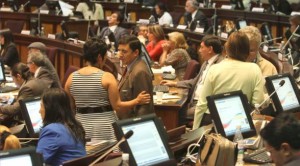 Today will be the first official meeting of the Committee appointed to process the 16 amendments to the Constitution. It is expected that the definition of the general outline of work for the next 14 months and a work and administrative details schedule are set.

Veronica Arias, President of the Commission, said that a strong diffusion process of the 16 amendments will be held on 2015 and indicated that they do have the attribution to change the texts, as long as the spirit of constitutionality is respected.

The ruling party said that legislators who fail to attend will have an economic penalty and also, by not fulfilling their responsibilities, a revocation process from their charge could be initiated against them.