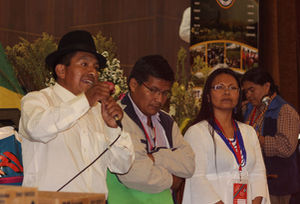 Jorge Herrera, candidate of the Ecuarunari, will direct the destiny of the Confederation of Indigenous Nationalities of Ecuador (CONAIE) for a period of three years from today.

Herrera won a victory over Monica Chuji, of the Kichwa peoples of Sucumbios and Olindo Nastacuaz, from the  Confederation of Nationalities and Peoples of the Ecuadorian Coast (CONAICE).

The election was made in the coliseum of the Technical University of Ambato (UTA), located in the north of the city, in the V Congress of CONAIE.

The election of Herrera was one of the last points that are discussed in the V Congress from 16 to 17 May. Some of the resolutions are a march by the Water Law, the Sarayaku support and respect for Bilingual Education. ‘We will strengthen the organizational bases of our nationalities in the Amazon, Coast and Highlands. The congressional mandates will be enforced,’ Herrera said.

8 proposals for the draft Labour Code