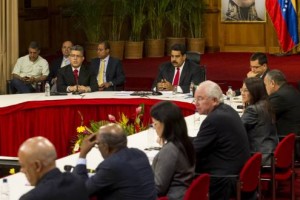 The President of Venezuela, Nicolas Maduro, aspirated yesterday that the Unasur meeting with foreign ministers  and opposition leaders scheduled for this Sunday, allows to continue the peace talks, following the arrest of students in the last week.

‘I welcome the UNASUR chancellors, who arrive on Sunday and I aspire that these conversations are fluid, quiet, with no pressure and we could move forward to build apositive agenda for the country,’ Maduro said in a press conference at the presidential palace.

Following the arrest of hundreds of students during manifestations in the last week and considering that the dialogue lacks of concrete results, the Democratic Unity Table (MUD) including 30 parties with ideologies from extreme left to extreme right, the MUD declared last Tuesday in ‘crisis’ the conversations with the government.

The MUD requires that the government primarily makes decisions about the release of students and opposition leaders arrested during the protests, and the former commissioner Ivan Simonovis, prisoner since 10 years ago, and accused on murder during the coup d’etat against Hugo Chávez in 2002 .