CONAIE will prevent the eviction of its headquarters 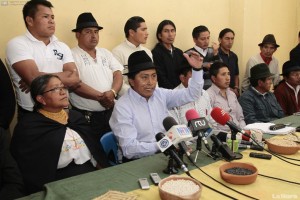 The leadership of the Confederation of Indigenous Nationalities of Ecuador (CONAIE) announced on December 15 actions to avoid the eviction of the facilities where it works since 1991, after having been notified by the Ministry of Economic and Social Inclusion (MIES) with the completion bailment contract signed until 2021.

The President of CONAIE, Jorge Herrera, said that this government’s decision is a “persecution of the struggle processesesof the indigenous movement.”

“This house is owned by the indigenous and social movement of Ecuador, and we demand the national government to give us the title deed; this space will continue serving so that other organizations at national and international levels continue operating,” he said.