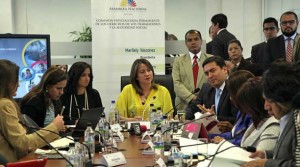 Assembly members Oswaldo Larriva (former AP) and Betty Carrillo (AP) yesterday staged a verbal confrontation during the session of the Commission on the Rights of Workers that was discussing the Labor Optimization bill, sent as an economic urgency to the Assembly by Executive order.

During his speech, Larriva proposed to incorporate a temporary provision to the bill to establish a 25% wage reduction to the superior level of all State functions and questioned the fact that the reform is intended for workers who earn the minimum wage .

In her turn, Carrillo told Larriva he was never a revolutionary and he should resign because he does not deserve to be an assemblyman, since was elected by Alianza PAIS and he no longer belongs to this movement.

The Supercom files a complaint against daily Expreso for interculturalism