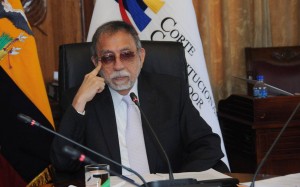 The provisions refer to the validity of indefinite reelection and the deadline for the Assembly to amend the Law on Public Service.

Ruiz explained that the CC found that the transitional provision, in the regulatory processes of constitutional or legal nature, are provisions of a secondary nature; ie is basically about the temporality depending on which should be applied to the principal.

The sense of the main provisions have not been affected, continued Ruiz, all the transitional provisions do is establishing the time or a condition or a mode, the main text shall take effect depending on these provisions.

Ruiz added that the Court shall notify to the Parliament to make the corresponding publication in the Official Gazette.