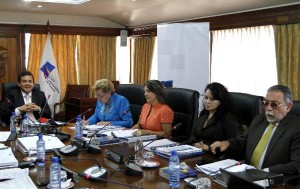 Judge Antonio Gagliardo said that the Constitutional Court today would resolve the three claims of unconstitutionality submitted before 70 articles of the Communications Law.

Gagliardo said that in the plenary “were some disagreements, observations, comments to strengthen the statement. We have a slicker text with the opinion of the judges.”

Wendy Molina, Vice President of the Constitutional Court, called on a regular meeting to discuss the full agenda, in which this case is included.

Three demands were presented: one from Enrique Herrería, other from Luis Fernando Torres; and finally one from the representative of the University of San Francisco, Farith Simon.

Demands revolve around the lack of debate in the National Assembly to enact laws, and on articles that could contravene the Constitution and other international rights.