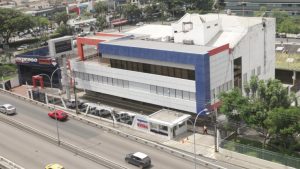 Headquarters of Daily Extra, in Guayaquil.

“There is no proportion between the alleged administrative infringement and the penalty imposed,” said Enrique Herrería, former judge of the Constitutional Court and former director of the Observatory of Rights and Justice, on the sanction received by Daily Extra for the apparent non-compliance with Section 36 of the Organic Law of Communication (LOC).

The norm stipulates that the media must publish news related to interculturality in the 5% of its daily news.

However, according to the Superintendency of Communication (Supercom), Daily Extra would have missed the 1.43% in the edition of March 2, 2017, despite the fact that this newspaper assigned a full page to the note titled ‘With the dance, they express their love for the Pachamama.’

The fine, which is the most severe, amounts to 10% of the billing of the last three months of the media, which is approximately $ 153,000.

But beyond the sanctioning of the Guayaquil newspaper, Daniela Salazar, a professor at the Faculty of Jurisprudence of the USFQ, believes that the law has “restrictions on freedom of expression that are incompatible with any democratic society.”

Ecuador before an empty chair