Overseers for the works on the Yasuni park still required 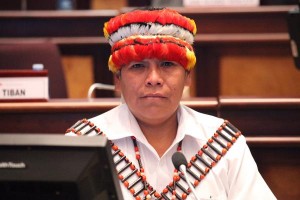 After more than a year that the Commission on Biodiversity of the Assembly requested to the ministries involved in the extraction of crude oil in the Yasuni National Park to prioritize the creation of an observatory and a citizen oversight, such team does not yet exist.

On February 11, before starting the meeting of the commission to address the issue, the Assemblyman of the Alianza PAIS party and president of the commission, Carlos Viteri, said that the work of the state oil company Petroamazonas comply with the environmental requirements previously established. He also explained that during the visit to the project area, they found no abnormalities.

The members of the Commission on Biodiversity toured parts of the park on January 19. The visit included sectors of the blocks 31 and 43.

Among those attending to the meeting was also the representative of Pachakutik, José Acacho. He made some negative observations that were also part of the discussed report.