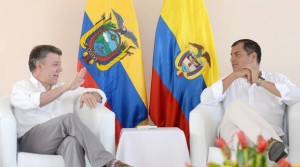 President Rafael Correa met yesterday with the Colombian President Juan Manuel Santos at the High Performance Centre, in the framework of the third binational cabinet to assess the progress on the commitments made in 2012, raised to improve the situation of the common border. On the meeting memorandums of understanding on migration, health and for the fight against illegal mining were signed.

Correa recounted the achievements but also the delays, which took place mainly in the social, cultural and environmental areas, which according to Correa, “have no relevant aspects to explain,” nor advances were presented in “the creation of a binational border integration plan to achieve the welfare of 2.5 million people.”

Correa added that the creation of a fund to finance social development for which a contribution of $ 10 million had been thought, was suspended because of the “intermediate managers,” who according to the President, disobeyed the political decisions.

In addition, Correa anticipated that, economically, 2015 will be a difficult year, which will require a concerted effort and should start with a deficit reduction in investment.

Santos, meanwhile, highlighted the purpose of the meeting, stating that “with the mere fact that presidents held their governments accountable,” the ministers accelerate the work.