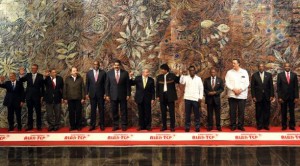 The Ecuadorian Vice President, Jorge Glas, yesterday urged the countries of the Bolivarian Alliance for the Peoples of Our America (ALBA for its Spanish acronym) to commit to “major challenges” in order to strengthen the integration, considered as “strong sustenances” of development for the region.

In the framework of the XIII Summit of ALBA, Ecuadorian Vice President said that this integration is based on “solidarity, complementarity,” and should have the human being “as the center, not markets or capitals.”

“We have tools from the political,” said Glas who indicated that the financial integration is “a challenge” for the countries of the region.

Glas, on the achievements of the ALBA, highlighted the implementation of the Unified System for Regional Compensation (SUCRE), one of the integrationist projects launched by the mechanism to create and strengthen trade through a virtual currency.

“This joint has different challenges with one goal that unites us all, which is being able to achieve this productive, financial integration as we have done it politically and socially,” said the Vice President.

In addition, he concluded that if the countries of the region “do not come together to face schemes of domination that can bend our economies, we will not find an effective response.”

Russia will replicate US sanctions