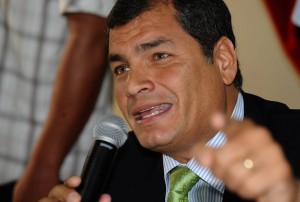 The President of Ecuador, Rafael Correa, said yesterday that it is “wonderful news” the guerrilla decision of declaring a unilateral ceasefire indefinitely.

“The FARC unilateral cease-fire and indefinite is also extraordinary news (sic). We are living historic days in our America,” said the socialist president in his Twitter account.

On Wednesday in the Havana, the FARC announced it has “resolved to declare an indefinitely unilateral ceasefire and cessation of hostilities, which must be transformed into armistice”.

Furthermore, they added they aspire to count on an oversight of several international organizations such as the Union of South American Nations to ensure the “success” of the truce.

The ceasefire from the FARC “will come into force at 00:01 hours on December 20th (…) if until that date at least one of the organizations aforementioned have the willingness to verify the process,” they said.