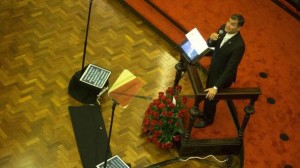 President Rafael Correa said on Tuesday in Brazil that Latin American countries should set limits on speculative financial capital. He also criticized the delay in the implementation of the Bank of the South.

In an exhibition at the Law Faculty of the University of Sao Paulo, Correa defended the presence of the State in economic activity and cited Argentina´s case with hedge funds, a fact he called “abuse of sovereignty.”.

On the creation of the Bank of the Brics countries (Brazil, Russia, India, China and South Africa), he criticized the lack of coordination to operate it, according to Correa, it would be essential to unite a portion of the reserves of countries and promote regional infrastructure projects. “It is absurd that Latin American countries have reserves abroad”, he said.

The President travels today to Brasilia to participate in the meeting of the Community of Latin American and Caribbean countries (CELAC) with China and the Union of South American Nations (Unasur for its Spanish acronym) with the Brics leaders.