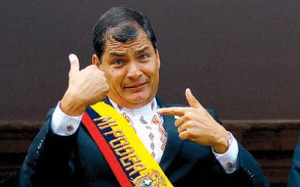 In front of an audience of students and scholars in France, the regime leader Rafael Correa, criticized again the Inter-American System of Human Rights (ISHR), in a lecture at Sciences Po University in the city of Poitiers, entitled “The Latin American reality.”

Point by point, Correa diminished the actions of the Ecuadorians two weeks ago went to the Inter-American Commission on Human Rights (IACHR) to file complaints against his regime.

During his speech discussed, something he calls the new forms of neoliberalism, citing the “onegesismo,” referring to certain non-governmental organizations (NGOs). Correa said on 28 October, the “alleged social organizations” of Ecuador denounced their regime with the Commission. The president said “all these organizations are created by the losers of the election.”

The group that Correa criticized in front of the French is made by journalists, indigenous, teachers, lawyers, among others, at the same time asked the Commission a statement on the status of certain rights in the country. Again Correa expressed his discontent that the IACHR headquarters is in the U.S., a country that is not a signatory of the American Convention, and once again criticized the Organization of American States (OAS).

Induction gas cookers will have a price soon