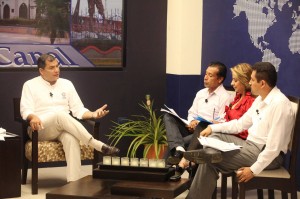 President Rafael Correa questioned the “scandal” generated after Ecuavisa journalist Alfonso Espinosa de los Monteros expressed his claim because of the government’s campaign “Citizenship speaks to the media”, in which one segment offended him.

“In Europe, in the United States, news anchors present the news, but these people give their point of view, rejects, then he is doing politics and while he does politics he will have politic responses”, the President said.

Correa said that the campaign is “legitimate” and that he did not saw ‘nothing wrong’. However, he added that the Secom will obey Cordicom suggestions though, in his criteria, “no rights have been violated” for the news anchor.

The president concluded that the objective of the Secom campaign was to defend the government from the alleged “attack of a press that has been used to make politics, to put on and depose presidents betraying their role to report”.