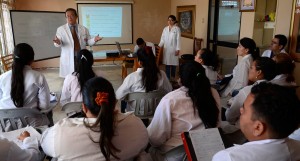 Today takes effect the new Integral Criminal Code (COIP). As a result, doctors say that doctors in the country will have to think hard before attending an emergency, since Article 146 defines culpable homicide for malpractice and has a penalti of imprisonment of between one to five years.

One of the consequences of the implementation of the code, according to William Bastidas, President of the College of Physicians of Tungurahua, would apply what they call “defensive medicine”, which means “be very suspicious of a diagnosis”, he adds.

Moreover, not making diagnoses based on clinical criteria and seek more analysis of “highlevel” would be what many doctors would opt for.

“Now we have to do all kinds of tests to give a professional opinion,even those that we had not considered doing before, which means more money spent by the patient”, said Fausto Idrovo, President of the Medical Association of Azuay.

Last week, President Rafael Correa denied that the new rules will seeks to chase doctors. He added that the Code protects them “because now the medical malpractice is correctly defined”.

Chancellery will receive donations for Palestinians