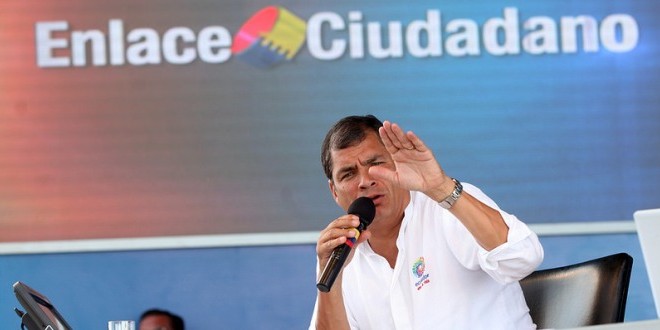 President Rafael Correa called “retrograde and cavernous” certain positions outlined in the book “Testimony of a commander” of the former head of the Joint Command of the Armed Forces, Ernesto Gonzalez.

During his National Address, the president questioned and welcomed the publication of the book for the country to discuss about “what it say these commanders, the old guard … to see who is right and who is wrong in …”.

Correa refuted what was said by González which notes that the current government does not give enough importance to the Armed Forces; they have civilian defense ministers, which deviates from its role to the military with a constitutional amendment, and others.

He urged the young officers to reject this discourse “retrograde and cavernous that was once valid, two centuries ago when our society depended on the liberating armies”.

For Correa, this was a soft coup d’etat. “The biggest problem is the general mismanagement of the language, can be a great military but not a good linguist,” he said.

“But he will not know that forced retention is like kidnapping that’s a bad use of language, he believes the 30-S there was a coup d’etat that’s their problem,” he stated.

Former militaries are offended by statements of President Correa