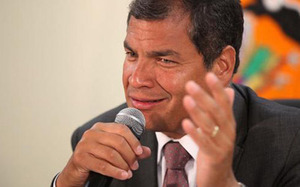 The President of Ecuador, Rafael Correa, said yesterday during a press conference that took place in Moscow, capital of Russia, where he is in an official tour, that  Alianza Pais (AP), party which he heads, does not sanction who thinks different, but those who are undisciplined, in reference to the three legislators that promoted the partial decriminalisation of abortion in the National Assembly and who were suspended for a month.

“The problem is not to think different. Within Alianza Pais there are people pro abortion and against abortion. We are a democratic but disciplined movement, and the problem was that they did not respect the agreements,”said the President.

Correa said that within the political movement “there is no issue that has been discussed more than abortion”, however the legislators broke the discipline because “we had come to a consensus on how the article should be” which was been debated and “at the last moment they tried to change it”.

President Correa believes is “absurd” that for being a leftist we have to be in favor of abortion, and indicated for example, “If Che Guevara was anti-abortion he would be a right-wing man, and whether Pinochet was pro abortion, he would be a leftist”.

Paola Pabon, Gina Godoy and Soledad Buendía received a sanction which includes one month of suspension.

Last October 10, Assembly member Pabon  filed a motion in the National Assembly  for the abortion to not be punishable when it is practiced to prevent a threat to life or health of the mother and if the pregnancy is a result of rape.

Correa achieves trade agreements during his trip to Russia