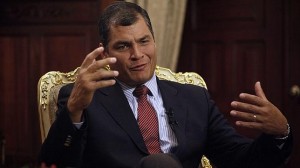 Correa said he was not interested in power, but said it is a possibility to be a candidate for elections if the Constitutional Court ruled that indefinite reelection is processed via amendment in the National Assembly.

The President also challenged César Montúfar (Concertación party) and Guillermo Lasso (Creo party) to gather the signatures required to defeat them at the polls. “We have no fear of the pronouncement of the people,” he concluded.