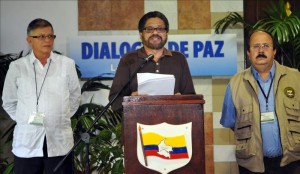 The communist FARC guerrillas on Saturday, September 26 proposed the creation of “collective scenarios and national policies” designed to promote “social and political forgiveness” in Colombia, as a “sine qua non” to overcome violence in that country and to foster national reconciliation.

Before starting a new round of peace negotiations with the Colombian government in Havana, the guerrilla negotiator Sergio Ibáñez said that “forgiveness contains that invaluable release strength of the present and the future of the burden from past actions.”

The call is contained in one of the three proposals, a total of 10 minimum, that the guerrillas presented to the press on Saturday, all to ensure the rights of the victims of the Colombian armed conflict that began in 1964.