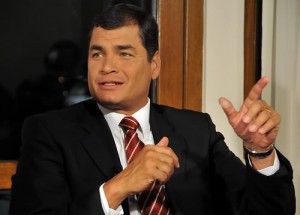 The President of the Republic, Rafael Correa, said this Saturday that the Government would be able to overcome economic difficulties because of the fall of oil prices.

He added that “the problem is not fiscal, is external” noting that the Ecuadorian economy is “strong” and that public spending this year will be maintained.

“The most clumsiness would be to reduce public spending, as certain opponents aspire, because this measure reduces economic activity which generates unemployment and economic decline,” concluded the President.

Ecuador would be willing to review the safeguard measure to Peru