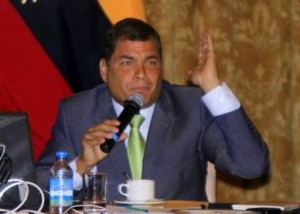 President Rafael Correa last night officialized three new changes in his cabinet. Carlos Marx Carrasco will be the new Minister for Labour Relations, after being seven years the head of the Internal Revenue System (SRI).

Marx Carrasco will be replaced by Ximena Amoroso Iniguez, who served as Under Secretary for Science, Technology and Innovation at Senescyt.

The Executive Decree 256 also draws  Ledy Zúñiga as Justice Minister instead of Jose Serrano, head of the Ministry after the absence of Lenin Lara, the current Virtual Mayor of Esmeraldas.

These changes are the complement of the designations that Correa implemented last Monday, which include Vinicio Alvarado as Secretary of the Public Administration; Viviana Bonilla, Secretary of Policy Management; Paola Carvajal, Minister of Public Works.

While Hector Solorzano will be delegated to the CTE representing the Executive; Michel Doumet Chedraui, delegate to the directory of the ANT; Omar Simon, General Secretary of the Presidency, and Rommy Vallejo, National Secretary of Intelligence.