Correa Promised to USA to Return TC and GamaTV 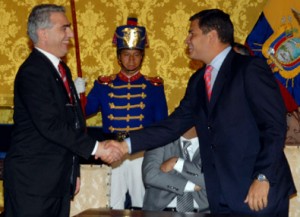 On July of 2008, President Correa, and the minister of Interior of that time, Fernando Bustamante, offered to the USA Ambassador, Linda Jewel that Ecuador would soon sell the television channels that were seized from the Isaias family.

The WikiLeaks document reveals that the case involved farewell meetings between Linda Jewel, president Correa, Bustamante, and the Vice President Lenin Moreno, along with the Air Force Commander, General Valera.

“The Ambassador urged the Ecuadorian Government to give back the channels to the private sector and other states that were also seized. However, Correa and Bustamante said that this was already planned. The Ambassador stated that the United States was concerned with the new visa policy since it would allow that many illegal immigrants travel to USA.”

According to the information revealed by WikiLeaks this subject was approached by the Ambassador Jewel in two separate meetings with Correa and Bustamante.

Surprisingly Correa and Bustamante admitted that they were not prepared to handle the Isaias Company, and also revealed that the government has plans to sell them. However they need to be sure if some of the current owners are real or are just names.

Regarding the visa subject, the WikiLeaks document revealed that United States is worried on this new policy, while Bustamante said  president Correa will not change his mind on this matter.

Finally, the document describes Correa as furious when they discussed the new language added to the constitution, especially in the section that refers about the prohibition for genetically modified organisms.