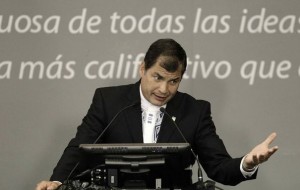 The President of Ecuador, Rafael Correa, promoted yesterday in Costa Rica, the `achievements of the citizen’s revolution´ his government performs in the country during a speech at the State university of the host country.

In his speech, Correa spoke about the `achievements of the citizen’s revolution´ which has turned his country into a `stable democracy´. `It has given access to rights, opportunities and decent living conditions,´ he said.

He stressed that Ecuador is a regional leader in the inequality reduction, as well as reduction of poverty advances, which have allowed greater equality in their country.

`I feel important because an Ecuadorian President has never before been invited to an exhibition at an university, and now we even have groups opposing this visit,´ Correa said.

A moment of the event was briefly interrupted by a member of the New Socialist Party (NPS) of Costa Rica, Correa´s oppositors, who was immediately evicted by the presidential security.