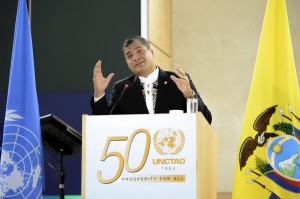 The “definitive independence” of Latin America, according to President Rafael Correa, would be achieved if all countries in the region are integrated and even create a common currency, the president said in his speech in Geneva for the fifteenth edition of the Raúl Prebisch Chair.

The President highlighted the challenges that developing countries face and noted that the integration of the continent would help in the economy of the region.

“With only uniting we could form the world’s fourth largest economy, with 5.9% of world GDP, with a third of the sources of fresh water on the planet, with the first place in the world food production and with hydrocarbon reserves for the next 100 years”.

Correa was in favor of creating a South Bank and a South Fund to sustain savings for the countries in the region and invest them into the continent.

“The best way to get free from the capital empire is the integration, from achieving simple things like regional minimum wages that prevent the absurd competition between our countries in favor of transnational capital, to influence as a block in the change of the unjust and immoral order,” he concluded.