Correa seeks to reform the COOTAD 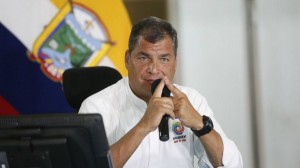 “Everyone should share the weight of the difficult times” said Rafael Correa this Tuesday, and later announced that he was seeking to reform the COOTAD (“Código Orgánico de Organización Territorial, Autonomía y Descentralización” in Spanish) so the State could assign resources to the local government departments according to the oil price – which is variable – instead of the price assigned to oil crude.

“It is not possible to govern without flexibility”, said the President. “This year the budget was approved with an oil barrel that was sold in

35 dollars, but last year, the same barrel cost eighty dollars”, reminded. The resource assignation but be based on the “real price” of the crude otherwise “it is impossible to manage the country”, affirmed. (I)