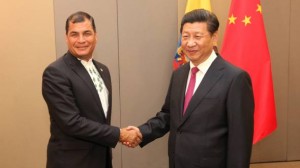 President Rafael Correa today begins his visit to the People’s Republic of China. The Government indicated it seeks to strengthen political, economic, trade, energetic, education, scientific and technological cooperation between the two countries.

The Secretariat of Higher Education, Science and Technology (Senescyt for its Spanish acronym), noted that three agreements for scholarships for undergraduates and postgraduates, scientific and technological development cooperation will be signed.

Correa has scheduled to meet with President Xi Jinping, Prime inister Li Kegiang, and the President of the Consultative Conference of the Chinese people, Yu Zhengsheng.

Furthermore, he will participate in the first forum between the Community of Latin American and Caribbean States (CELAC for its Spanish acronym) and China.