Correa: “The farce is over: Judge dismisses charges against Cristina Fernández.” 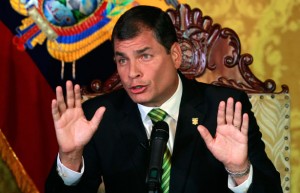 President Rafael Correa said yesterday that ‘the farce is over,’ explaining that an Argentine judge dismissed the complaint filed by the deceased prosecutor Alberto Nisman against the President of Argentina, Cristina Fernandez, in which she is accused of alleged concealment of terrorists.

“The farce is over: Judge dismisses charges against Cristina Fernández, Héctor Timerman, etc., by ‘lack of offense’ and by not meeting ‘the minimum conditions to initiate a criminal investigation,'” said Correa in his Twitter account.

He added: “In an attempt of conservative restoration, this and more will come against the progressive governments of the Great Motherland. We have not allowed to forget! Until the victory!, dear Argentina!”.

These statements were made after Judge Daniel Rafecas indicated that after analyzing the evidence, ‘is clear’ that none of the lines of impeachment exhibited by Nisman and then retaken by the prosecutor Gerardo Pollicita have ” are minimally held” according to a resolution issued and disseminated by the Judicial Information Center (ICJ).