Correa: “The IACHR has no power to issue precautionary measures” 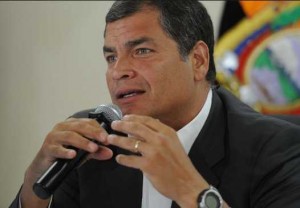 Following the request by the Inter-American Commission on Human Rights (IACHR), to apply precautionary measures for Assemblyman Clever Jiménez, President Rafael Correa questioned such action by the international organism.

During a meeting with the media last night in Guayaquil, Correa said, “In any way the Human Rights Commission has the power to issue precautionary measures, but if so, it is the height to attempt to reverse a judgment rendered in a sovereign country “.

He also stated that with this action, the organism was a step away from their “debunking”.

In the same way it was mentioned that the report of the organism is illegal, because it was not determined “that the due process was met” or an irregularity has been submitted.

In conclusion, the president said that his intention “is not to carry anyone imprisoned, but of justice”, so he will let the case against Jimenez take its course.