Obama meets with Pope Francisco in the Vatican 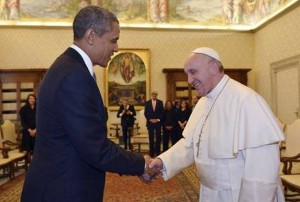 Pope Francis and the U.S. President Barack Obama met for the first time this Thursday in the Vatican City, in order to establish a dialogue between the administration and the Catholic leadership.

They greeted each other with a smile, a handshake and posed for pictures before sitting down to table to dialogue.

“I’m a great admirer of yours,” Obama said in English to greet Francisco. `Welcome, Mr. President´, said the Pope in English, a language he does not usually speak, said the French agency.

The objective of the meeting was to focus on areas where two of the most influential men in the world agree, and pleasantly address issues they differ.

“I come to Rome to hear you,” recognized the U.S. President, who stressed that `the thought` of the Latin American Pope is `lovely to understand how we can gain the challenge of fighting extreme poverty and inequality in distribution of incomes,´ said Obama in an interview with the Italian newspaper Il Corriere della Sera.

122 objects related to flight MH370 are captured by French satellite