Correa to allies of PAIS movement: “The battle is all about communications …” to confront 2017 and 2019 elections 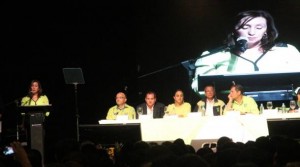 Political public officials who are allied to the political party Alianza PAIS (AP), approachment to people and a communication battle to face the 2017 and 2019 elections, is what President Rafael Correa asks to his AP movement.

At the Convention Center in Quitumbe, south of Quito, Correa led this December 18 a massive inauguration ceremony of 1,121 elected officials to occupy the sectional and AP Branches directorates, where he made a radiograph of the shortcomings and errors in the internal structure of the movement that had been evident in the local elections of February.

He reminded them : “the battle is all about communications, and we are not necessarily winning, because the media are in the hands of the elite, transmitting that hegemonic culture.”