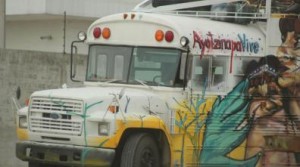 Cristian Andrés Rosendah, the driver of the Yasunidos bus, who was arrested by the National Customs Service of Ecuador (SENAE for its Spanish acronym), during its passage through Ecuador, has 72 hours to leave the country, according to a notification of Tuesday December 16.

The vehicle that was seized on December 2 is in the cellars of the public entity, in the south of Guayaquil for ‘presumption of misuse of the Tourist Affidavit,’ because Rosendahl was conducting contrary activities to tourism.

In addition, it was reported that the possible fine of $ 5,000 and three years in prison for Rosendahl was already rejected by the customs authorities.