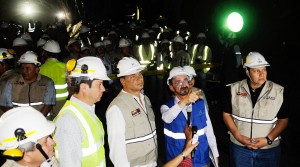 President Rafael Correa yesterday toured the construction works of the Coca Codo Sinclair hydroelectric plant, located between the provinces of Napo and Sucumbios. Correa noted that the “project deadlines will be met,” so its operation would begin in 2016.

Correa oversaw the work in the company of the Minister of Electricity and Renewable Energy, Esteban Albornoz, and the Manager of the Public Company Coca Codo Sinclair, Luis Ruales, among other authorities.

Albornoz would have reported to the President that the project has an advance of 74.75%.

Correa noted that the work “is a before and after in the country’s history,” according to the Twitter account @EnergiaEc.

He explained that its operation “will reduce the air pollution of 4 million tonnes of CO2 per year, equivalent to removing 800,000 cars off the road. “