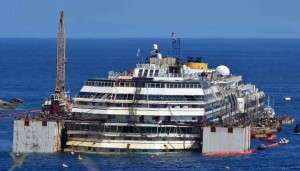 The Costa Concordia cruise ship floated again today for the first time since its shipwreck on January 13, 2012 off the Tuscan island of Giglio, in a tragedy that left 32 dead.

The 290 meters length cruise  was refloated in a wide operation to be transferred to a scrapping in Genoa, in northwestern Italy.

“The boat is floating. Is one meter above the bottom,” announced at a press conference Porcellacchia Franco, one of the engineers responsible for the refloating operation. The cruise will need one more meter to be displaced.

Refloating operations began at 6 (European time) and at the first phase the boat came off  underwater artificial platforms on which remained supported by large metal containers.