Ecuador’s country risk dropped 334 points in the last ten days. It went from 1,600 points reached on July 15 (during the dialogue tables to seek pacification of the country) to 1,266 points this weekend. The approaches of the current Minister of Economy and Finance, Pablo Arosemena Marriott, to the multilaterals as well as the development of the dialogue tables could be factors that have achieved this decline. Although the reduction in the indicator is pronounced, it is not yet at the acceptable or necessary levels of country risk for Ecuador. 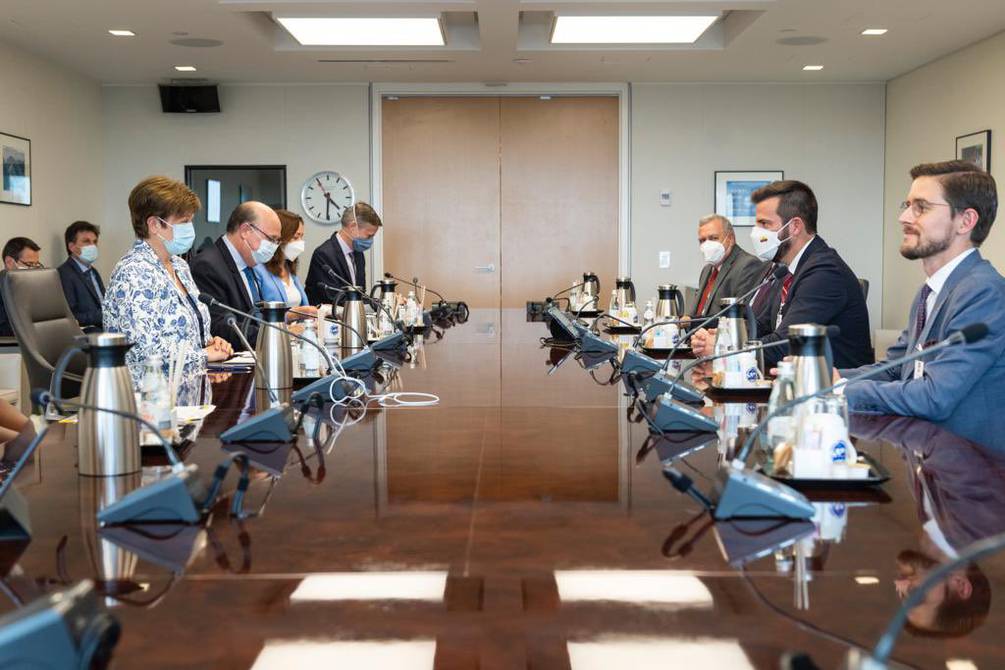 Last week, Minister Pablo Arosemena, together with other Ecuadorian delegates, held meetings with the managing director of the IMF, Kristalina Georgieva.

The Minister of Economy, Pablo Arosemena, explained this Monday, July 25, in radio interviews that this decline was precisely due to his rapprochement with the multilaterals. He recalled that when President Guillermo Lasso the elections in April 2021, the country risk fell by at least 500 points, going from 1,369 (March 8) to 835 (April 13), in what was called the “Lasso effect”. This, because the markets received the message that the new president was trustworthy and that he would manage the finances in an orderly and sustainable manner. But after the strike, the country risk rose even above the levels prior to the elections.

For Minister Arosemena, reaching the levels below 800 points that had been maintained during this year will take some time: “building is difficult, while destroying is easy”, he said .

According to Ramiro Crespo, president of Analytica Securities, the market became nervous with the departure of Minister Simón Cueva and the arrival of Minister Pablo Arosemena, but due to a misunderstanding. It is that the market read that Cueva’s departure was because he did not agree with the requests of the indigenous people that would generate greater expenses and that the arrival of Arosemena meant that he did agree with greater expense . However, Cueva’s departure had already been agreed upon in advance, and the idea was for the minister to stay until the end of the fourth and fifth reviews of the International Monetary Fund (IMF). .

“Cueva came out on the best terms of the Government”, says Crespo. He assures that the Government, after putting the house in order , was already preparing to make the payments and even improve investment in social matters. So, adds Crespo, Arosemena is also going to respect fiscal prudence. In other words, there are going to be greater investments in the social sphere, but this does not mean changes that generate problems in spending policy. Indicates that it is important for citizens to understand that the Government has a large debt acquired, especially in the co-operation, as a result of the mechanism used by that Government to build works with indebtedness, many of which were poorly done and overpriced.

he considers that now the market is seeing that in the dialogue tables it is possible to achieve better results than expected, to the extent that there is good faith. Additionally, the minister’s trips to Panama and Washington have allowed a better understanding of Minister Arosemena by the multilaterals.

Additionally, for Crespo, the fact that Lasso could not be removed by the constitutional mechanism of ‘cross-death’, and that they can no longer use this tool during the next three years, it also generates greater peace of mind.

Meanwhile, Minister Arosemena made a positive evaluation of his visit to Panama and Washington.

The minister reported that he met with representatives of the Development Bank of Latin America (CAF), the Inter-American Development Bank (IDB), the World Bank (WB ), the Monetary Fund, among others.

In Panama, he signed a $7 billion capitalization agreement for CAF, of which Ecuador is one of the main beneficiaries. He also met with Kristalina Georgieva, head of the IMF, which, according to him, served to strengthen financing and cooperation relations for the benefit of Ecuadorians.

Meanwhile, in the meeting with Maurucio Claver Carone, IDB president, the support of the multilateral was reaffirmed for the reactivation of small and medium-sized enterprises, as well as the development of infrastructure and conservation projects.

At the World Bank, the minister had two important meetings with his vice president Jorge Famliar and with the director of Policies for Development and Alliances, Mari Erika Pangestu. The conversation with them was about taking advantage of the thematic bonds in the international market and raising funds for fiscal consolidation. (I)