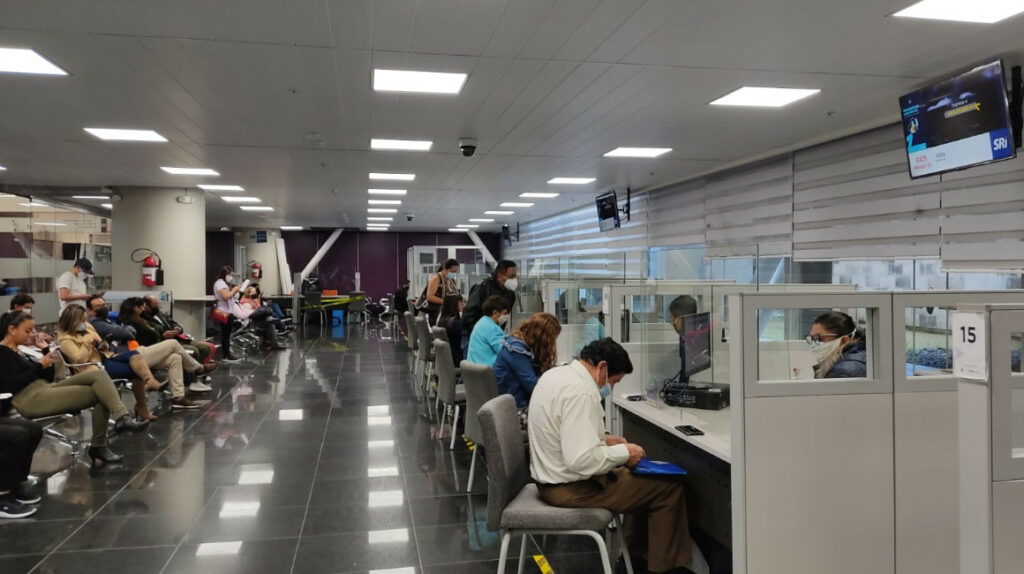 SRI users in the offices of the Financial Platform in the north of Quito.

In the first half of 2022, the SRI has collected USD 29 million for the temporary tax levied on wealth abroad.

This value corresponds to goods valued at USD 733 million , declared by 202 Ecuadorian taxpayers.

Two cantons are the ones with taxpayers with the most assets and assets abroad .

Quito and Samborondón concentrate 76% of what is collected by this tax established in the Economic Development Law , in force since November 2021 .

The rate of this tax ranges from 3.5% to 5.5%, according to the taxpayer’s declaration date.

Those who pay the tax between July and December 2022 will have to pay 5.5% on goods outside the country.

In the first semester of 2022, the SRI has collected only 14% of the goal that the government projected for 2022 for this tax, which was USD 200 million.

After December 31, if the SRI identifies undeclared assets abroad , taxpayers will have to pay Income Tax on those assets.

Javier Bustos, professor of taxation at the Universidad Espíritu Santo, explains that people will have to pay more money, since the Income Tax rate can be up to 37% in the case of natural persons.

In addition, the tax authority may charge interest and a 20% surcharge on those assets.

Taxpayers from 14 cantons of Ecuador have declared their assets abroad in the first six months of 2022.

The canton with the highest collection for goods outside the country is the capital, Quito , with USD 11.5 million.

Other temporary taxes, such as the one from the 2016 earthquake and the contribution of companies with high net worth from the last tax reform, show a greater payment of these taxes by Quito citizens, said Yael Fierro, a tax attorney.

Samborondón is the second canton with the highest collection, for USD 10.2 million.

In this canton of the province of Guayas, taxpayers have taken longer to declare the tax and, therefore, have paid a higher rate.

Cuenca is in third place, with a collection of USD 2.8 million.

91% of what was paid in Cuenca was declared in March, therefore, they also paid the lowest rate.

Guayaquil , despite having a population similar to that of Quito and being a city characterized by its high commercial activity, is fourth in collection of this tax.

The main port taxpayers declared USD 2.7 million. 75% of that value was declared in June 2022.

The SRI has a little more than five months left to reach 86% of the tax collection goal for these goods abroad.

The authority has three information matching instruments that will allow it to identify undeclared assets.

In August 2021, the SRI obtained information on 44,000 financial accounts of Ecuadorians in 43 countries , as part of an agreement with the Global Transparency Forum.

In addition, in April 2022, the Government of Panama included Ecuador in a list of countries with which it will automatically share tax information .

And on July 14, 2022, the Assembly ratified the agreement for the automatic exchange of tax information between the United States and Ecuador.

The governments will be able to exchange data that serve for the determination, liquidation and collection of taxes, in addition, for investigations in tax matters.

Francisco Briones, director of the SRI, explained that the authority will use these mechanisms to crosscheck data.

“We are processing the information to identify if it corresponds to what the taxpayers have declared,” he explained.