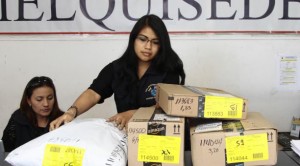 Couriers companies charged the rate of $ 42 for shipments under the 4×4 (400 kg / $ 400) modality in advance, despite the announcement that it would be postponed by one month the effective date of this resolution 023 Comex, which should come into force from September 8, 2014.

However, Juan Francisco Rodriguez, Director of normative of the National Customs Service of Ecuador (Senae for its Spanish acronym), explained that they were isolated cases and which are already solved.

He explained that there are three types of courier companies: those that specialize in bringing packages from boxes in Miami, those that send companies packages and those that are known as family. These last would have charged the rate one week before September 8.

Until now, Rodriguez said, complaints from companies that have not complied with the return have not been received.

54 Mejia’s students plead guilty for damaging property of others