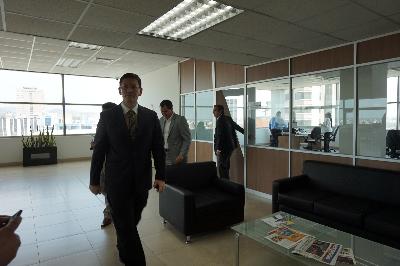 The President of the Provincial Court of Guayas, Julio Aguayo, confirmed on October 14 to the Expreso daily that he did not notify the Mayor of Guayaquil, Jaime Nebot, of the trial hearing in the case Las Dolores, which was convened on Monday October 13 by the Criminal Chamber of the National Court of Justice, in Quito.

“It definitely has not been dispatched (the notification) by the Presidency because it has not been brought to my attention,” Aguayo said, when explaining that the documents issued by the National Court to cite the Mayor as witness of the case did not reach his hands.

His statements were expressed after the meeting he held with Miguel Hernández and Vicente Taiano, Trustee and Secretary of the Guayaquil City Hall, respectively. Neither city officials nor the Provincial Director of the Judiciary, Bolívar Vergara, who was at the meeting, ruled on the matter.