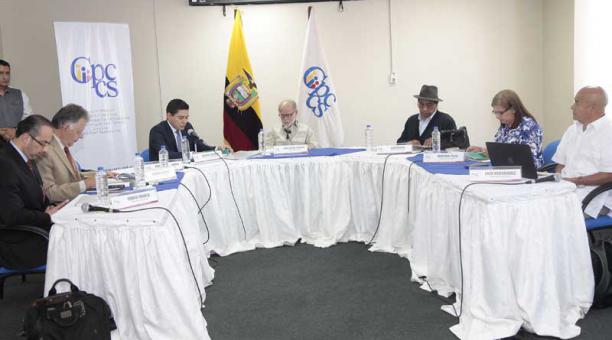 The Superintendence of Companies and the public defense Office will be evaluated by the Council of Citizen Participation and Social Control (Cpccs). This was resolved by the full transitory body meeting in Guayaquil on Thursday, April 12, 2018.

These two institutions are added to the Council of the Judiciary, State Prosecutor, National Electoral Council (CNE) and Superintendency of Banks that were already subject to evaluation from April 4, 2018. This process carried out by the Cpccs was approved in a referendum on February 4 and the agency has the power to dismiss officials if it merits it.

The transitory Council also decided to extend the deadline for receiving complaints from citizens, in view of the high number that has been presented in the country. Until the afternoon of this Thursday the counselors are planning to continue receiving complaints in person in Guayaquil, and until tomorrow they can submit in writing.

This was indicated by the counselor Miriam Felix during the recess of the session that was installed at 10:00. During the morning, the councilors received social groups, teachers, retirees, ex-judges, banana exporters, heroes and heroines association. The filing of complaints of the production chambers of Guayaquil was scheduled for the afternoon. So far most complaints are against the Judiciary. Of about 350 cases, more than 50% corresponds to the Judiciary.

Hernán Ulloa and a group of ex-judges denounced the alleged interference of the political power of the administration of justice. Meanwhile, the Association of Banana Exporters of Ecuador (Aebe) denounced the nullity of the delegation contract of Puerto Bolívar (El Oro) between the State and the Turkish company Yilport.

According to Eduardo Ledesma, director of the union, the concessionaire is charging “criminal fees” against the banana exporters and will affect the shrimpers when the port dredging process begins. He pointed out that the tariffs for each box of bananas put in boat increased from USD 0.12 to 0.17 and do not want them to continue rising because it is liquidating the producers and exporters from Ore.

Ledesma asked the Board to investigate the USD 750 million contract between Yilport and the State. Juan José Castelló denounced “the appropriation” of the Teachers’ Fund and requested the dismissal of the Superintendent of Banks, Mauricio Cruz, for alleged abuse of power, forgery of documents and violation of several norms and the Constitution. He noted that the official lied when he said that the audit had concluded that the fund received State resources. (I)