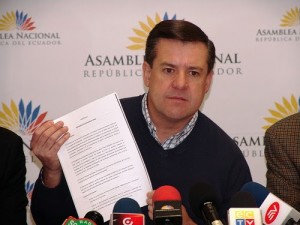 Andrés Páez, CREO Assemblyman and legislator for Pichincha, who two days ago submitted documents with which he questions a number of deposits made from China to Ecuadorian accounts, said on January 9 he will not shun any judgment in the event that the Vice President Jorge Glas, decided to report it.

“I have not filed a complaint, I do not understand this nervousness. If he going to prosecute me, then prosecute me. I will not run as Pedro Delgado,” he said in a statement to the media of Quito. Páez also said he does not understand why Glas “feels alluded.”

In a communiqué from the Vice Presidency, the statements of Assemblyman Páez were rejected, accusing him of “maliciouslypretending to link Glas in banking transactions.”