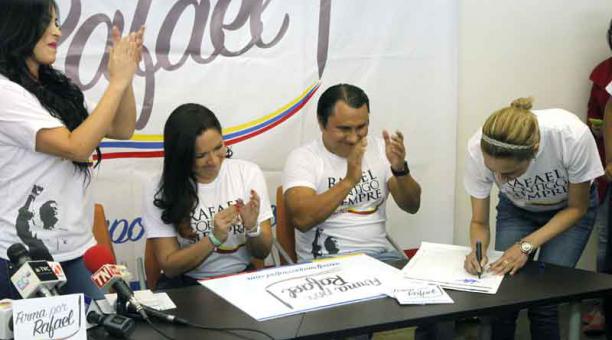 Last Friday, the National Electoral Council (CNE) reported to the representatives of the “Rafael With You Always” collective they are able to collect signatures for the referendum that seeks the immediate presidential reelection.

The electoral body announced that this week it will train the volunteers of the group. Last week, its spokeswoman Pamela Aguirre said that in 45 days they expect to collect a million signatures.

For the signature gathering task, have, she said, seven thousand volunteers.

Some political groups have questioned the proposal.

Thus, the prefect of Guayas and director of Democratic Center, Jimmy Jairala, said yesterday that the announcement of the collection of signatures is an “eminently political” issue because last May 24, in his Report to the Nation, President Rafael Correa he said he will not participate in the upcoming elections. “If the protagonist does not want to participate, I do not see a practical sense for the referendum,” Jairala said.

Uncertainty among lawyers and families by the key witness