Cuba Christmas tradition revives after rapprochement with the US 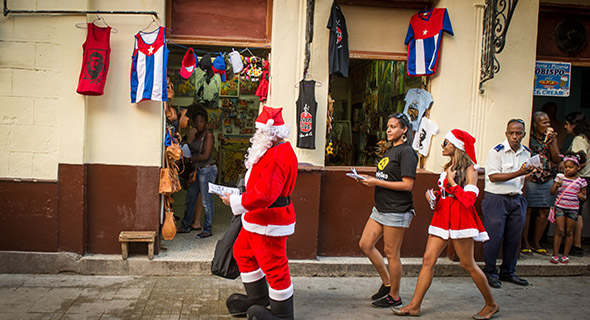 Cuba lived its first Christmas eve reconciled with the United States quite normally, without too many Christmas symbols through the streets and the initial euphoria over the news of the restoration of relations with the North American country.

A week after the historic announcement of the normalization of relations between the US and the island, broken since 1961, Cubans have rested the event and faced with caution and prudence feelings that have replaced the initial joy.

“Christmas was a long ingrained tradition in Cuba, was interrupted for 38 years, which is not few, and yet rising again,” told AFP secretary of the Episcopal Conference, José Felix Pérez.

To Yoandry, a bicycle-taxi driver who was walking with a cap of Santa Claus, one of the few Christmas signs seen today in Havana, the news of the agreement with the United States is “very good”, but just wait and see “what is the project that have “two nations.

In some state restaurants, the waiters attended with a cap of Santa Claus. “Before there was no Christmas arrangements, is something totally new,” notes a Latin American diplomat.