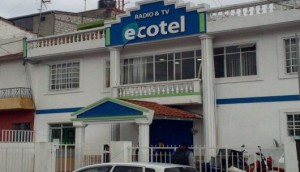 With reference to the articles published on December 17 of this year, entitled respectively “State seizes broadcast equipment from a TV channel” and “EcotelTV was declared in resistance,” to guarantee the right of readers to receive contextual information, daily El Universo made the respective rectification.

The Agency for Control and Regulation of Telecommunications (Arcotel), in a press release, clarified that, in a joint operation with the Provincial Prosecution of Loja and the National Police, in strict compliance with the applicable regulations, proceeded to raid the Television Channel EcotelTV, because the station was operating, despite the contract termination.

Daily El Universo published the news of the version of the Agency for Control and Regulation of Telecommunications (Arcotel), issued in a press release on 16 December. It mentions that the reversion process of the term of the EcotelTV frequency began in 2014 and, after passing through various administrative and judicial instances, the resolution would have been final.

Land Law should be technical, not political, according to Roboam Gavilanez